Change Your Life. Change the World.

We get it: you're passionate. You're determined to bring about a vegan world. At Main Street Vegan Academy, we share this passion, and we know that equipping you for the task ahead demands a personalized, professional, in-depth experience. Because this is what it takes, this is what we offer -- in two powerful formats, live via Zoom (with all sessions fully recorded), or in person in New York City.

Our commitment is to the provide excellence in plant-based training and vegan education, and support out graduates’ progress going forward. In person in NYC: Since our inception in 2012, we’ve realized that the training we provide is relevant not only for one-on-one vegan coaching, group classes, and outreach, but to vegan entrepreneurs of every stripe. In addition to coaching and teaching, our graduates are running plant-based companies, vegan shops, and restaurants, they on staff at animal rights and health-promotion organizations, writing books, podcasting, and using their VLCE credential as part of a pre-existing profession in healthcare, nutrition, fitness, yoga, etc.

And there's more: the connections you make here are priceless. Our vegan classes are kept small so that you can get to know your fellow students and our respected instructors. Whether you come to New York for an MSV Elite program, or you do MSV-Zoom, you will be connected via our private Facebook group not only with members of your class, but with other alumni who share interests, background, or locale with you. The networking opportunities are unparalleled.

Here's what Forbes.com has to say about us:

“This program inspires entrepreneurs and seeds vegan business endeavors of every sort. The curriculum is solid, the faculty top-notch, and the immersion experience and after-graduation support incomparable.” 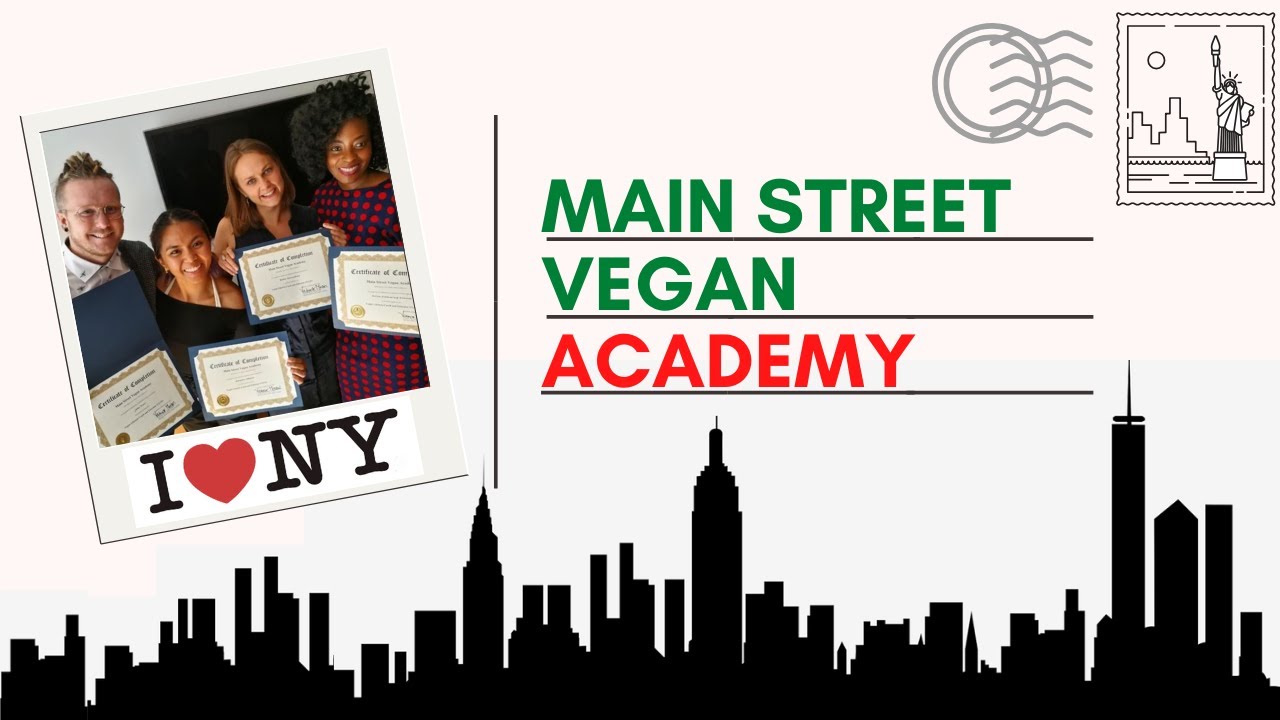 Your instructors include major voices in the vegan/plant-based world. Among them are:

Ready to Apply for the Academy?

Some of Our Graduates

We have some 490 graduates from 31 countries on 6 continents. Here are a few of them: Some Ways Our Grads are Veganizing the World

“Victoria Moran creates a life-changing experience for her students at Main Street Vegan Academy. The wealth of knowledge, passion, kindness and insight that Moran and her team of instructors bring to the course is nothing short of genius. My only complaint: having to leave when it was over."

“I feel privileged to have been a part of such an amazing, love-filled group and a truly extraordinary vegan coaching program. Priceless!”

“Main Street Vegan Academy will forever be a pivotal experience in my journey. Having the opportunity to learn such a well-rounded arc of information and knowledge, has motivated and furthered my commitment to help others attain levels of health, happiness and purpose that the vegan lifestyle provides.”

“I just wanted to let you know how grateful I am for being a part of such an amazing course. I have learned and grown so much in a short time and I will be role modeling and transferring my knowledge to as many people as I possibly can during my travels and throughout the rest of my life.”

“I can’t fully express my gratitude to Victoria Moran for MSVA! The class was an incredible experience. Victoria put together an amazing lineup of presenters. This course was exactly what I needed to jump-start my vegan counseling business.”

"I will never forget all that I have learned here and appreciate your work beyond measure."

"Thank you for this life-changing experience. I will take everything that I've learned and change the world!"

"Thank you for changing me and changing the world."

What makes me qualified for this course?

Being a dietary vegan over 18 who satisfactorily completes the application, reads or listens to the 6 required books (list sent upon acceptance), and listens to 21 hours of the Main Street Vegan podcast qualifies you for the course.

How much is tuition?

If I opt for the MSV-Elite course, where will I stay in New York City?

We are located in South Harlem half a block from the #2 and #3 subway line, easily accessible from the Upper West Side. Upon acceptance to the MSV-Elite program, we send you a list of nearby accommodations in a variety of price ranges, either within walking distance or an easy subway or Lyft/Uber/taxi ride away.

Why should I take this vegan course instead of some other program?

There are terrific classes out there and MSVA celebrates all our colleagues in their important work. Among MSVA's shining features are:

(1) We cover every aspect of vegan living, equipping you with well-rounded expertise

(4) If you wish to stay connected through the Main Street Vegan private Academy Facebook group, private mailings, graduate projects and other events, we're here for you for the duration

(5) Although we offer an in-depth master class for graduates every two years, no continuing education is required to keep your VLCE in good standing

(6) If you opt for the MSV-Elite program, in person in New York City, you'll be treating yourself to a once-in-a-lifetime experience you'll remember forever and that just might change your life. Victoria Moran is a force of nature. At 14, with credentials from a teen magazine, she attended her first Beatles press conference. She’s been surprising herself ever since.

Victoria went vegan in 1983; overcame a binge-eating disorder; in 1985 wrote Compassion the Ultimate Ethic, the first book about vegan philosophy and practice to come from an actual publisher; raised a vegan daughter (aerialist and stunt performer, Adair Moran); wrote 12 additional books and has another on the way; and appeared twice on Oprah.

Victoria hosts the award-winning Main Street Vegan Podcast, was voted Peta’s Sexiest [Female] Vegan Over 50 in 2016, and she is lead producer of the 2019 documentary, A Prayer for Compassion.

“I love the line from the vintage movie, Auntie Mame: ‘Life is a banquet, and most poor suckers are starving to death.’ This is why I created Main Street Vegan Academy, not to simply ‘teach stuff’ but to ignite within each student their unique gifts, gifts that are capable of transforming the future. Our powerful course is packed with practical information from world-class presenters and infused with an energy that has to be experienced. I hope that experience will be yours.”

Location for the MSV-Elite course:

In person in NYC:

Ready to Apply for the Academy?

"The 'Good Housekeeping Seal of Approval' for vegan, BeVeg International is the first in the world to gain global accreditation for its vegan trademark by ISO. The BeVeg vegan standard ensures a global approach specific to vegan values, with focused content, specialized technical training, and applied technique."